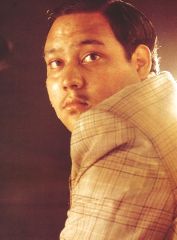 Shri Bhole Ji Maharaj is the second eldest son of Hans Rawat and was born on 26 or 27th July, 1952. In the 1970's Divine Light Mission he was the weird member of the Holy Family, said to be the Lord of Music and indeed he was the leader of the Blue Aquarius Big Band, whatever that meant. He was not a good-looking young man and was obedient to his mother when she deposed and disinherited Prem Rawat as the Perfect Master and Lord of the Universe. The young guru claimed his Perfectness was self-existent and self-evident though this evidence was not accepted by more than a few tens of thousands of residents of the Universe. Prem had already ordered Blue Aquarius to disband and ordered his followers not to take orders from his mother or elder brothers so Bhole Ji was left with little to do but play second fiddle to Bal Bhagwan Ji who renamed himself Satpal Maharaj and went on to an impressive career as Godman and politician.

He married a dynamic woman (Mata Shri Mangla Ji) and they have three daughters. Their Daughter, Sweta Rawat, is co-founder and chairperson of the Hans Foundation created in 2009, an Indian charity that disburses funds to organisations involved in various health and social programs in India. This has basically been funded by the Cofounder/Principal Donor Manoj Bhargava who created the extremely lucrative "5-Hour Energy Drink" which may be doing wonderful work making gullible Westerners think they are getting cheap energy and in doing so they are providing poor Indians with help. Whether this will provide substantial help or is merely a scam remains to be seen though there is no doubt the Hans Foundation has already (2014) provided more funding to not-for-profit organizations than the Prem Rawat Foundation has in it's 12 year existence. This sudden infusion of wealth may have been what gave Bhole Ji the impetus to get from under his brother's coat tails and start his own Spiritual Centre, the Hanslok Ashram. It was rumoured within the Miami premie community that Bhole Ji provided a substantial financial gift to his younger brother Raja Rawat who had been left without adequate funds by their youngest brother and former Lord of the Universe, Prem Rawat, to maintain the lifestyle he aspired to and this was confirmed when "Shri Raja Ji" began appearing (circa 2015-16) on stage at Hanslok events in India.

Left to Right: Sweta Rawat, unknown organiser, Shri Mata Mangla Ji, and Shri Bhole Ji Maharaj on a walk for some good cause

The Satlok Ashram Website began with a bang in 2010 but has since suffered from neglect and may be offline for good as it appears to have been replaced by the Hanslok Website. Possibly because of the ongoing criminal controversies about Sant Rampal Ji Maharaj and his Satlok ashram. However, Bhole Ji glorified Hans Rawat and Mata Ji Rawat - something the other brothers have let go - and provided some interesting free documents for a while including:

Bhole Ji and his wife seem to live a life of openings, festivals and meetings.

while their daughter, Sweta, looks after the other, less frivolous, side of the family business.