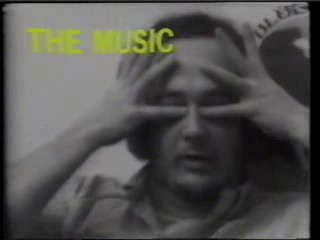 When Prem Rawat, or Maharaji ("Ultimate Ruler") as he calls himself, or Guru Maharaj Ji as he was called when he first came to the West, spruiked his Knowledge as the method to achieve God Realisation through his empowered techniques of meditation. In the late 1980's he altered some of the actual techniques of meditation he and his father and predecessors had taught. However the Divine Music (or "Celestial Music" or "Unstruck Melody") technique remained unchanged though only 1 hour a day of formal meditation was now required rather than 2 hours.

The Second Technique, or Heavenly Music, place your hands thus: each thumb is placed in the ear and each hand is twisted upwards so that the four fingers of each hand rest on the top of your head, with each thumb tip lightly but firmly in each earhole, sealed with the twisting action. A slightly different method was also taught by some mahatmas in which the smallest fingers cross the eyeballs and touch the bridge of the nose.

Hans Rawat (Prem Rawat's father and guru) wrote of the power of the Divine Music to steady the mind:

Generally, the mind wanders about after pleasures like a drunken elephant in a forest. But the Divine Music is the goad which curbs this elephant. In other words, when the mind hears the Celestial Harmony, it is absorbed.

But there is a music going on inside of yourselves also, and God plays that music. It is such powerful music, so symmetrical, and so beautiful that on the first strike man's mind is concentrated upon it. No question arises that the mind should be fickle. A million powers on this side, a million powers on that side and man cannot be removed from this meditation, this meditation is so perfect.

Unfortunately he appears to have been completely wrong. He often repeated a story which he attributed to the medieval sant poet, Brahmanand:

There was a great saint, Brahmananda, who talked about these things. He says, "I have seen a great wonder." And what was that wonder? A man who has no legs climbs all the way upstairs into this nectar that is in this well right in the center of the whole heaven. And he drinks nectar from that well; not water, not vegetable juice, but nectar. And then he says, "A deaf man who can't hear anything listens to this music and gets into the melody, he just puts himself into the melody." Then he says, "A blind man sees this castle, this beautiful castle adorned with bright diamond lights. And he sees this castle and describes it as having no foundation, though he is blind." And then ultimately he says, "Only those people who have realized this Knowledge can understand what I mean to say." And if we take this thing to scientists, they will just get mad about it and say, "This is not possible, and if it is, okay, we will test it." That's the answer they will give. 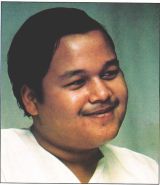 Question and Answer Session, Portland, Oregon, June 29, 1972
When you become Lord of the universe, you become a puppet, really! Nothing else; not "you." Not "I," not "you," no egos, no pride, nothing else. One with humbleness; servant. Very, very beautiful Always in divine bliss. Creating your own environment -- wherever you go, doesn't matter. Like my friends used to play and I used to sit right in the corner of my ground and meditate (laughter)
Even 10,000 times more far out experience you get when you are divinely blissed with the Knowledge. Then Knowledge just takes you, and takes you into an environment never thought of; never thought of, beautiful. When one can really get into the Music, get into the Word, get into the Light, it's so beautiful; so blissful. Just grand, you know! When someone has mastered it, really very far out! So that's what I tell premies: "Meditate, and get somewhere." Yes? Élan Vital, Volume II, Issue 2, Summer 1978

Phipps Auditorium, Denver Colorado, 2nd May 1974
In this Knowledge you can get to a point where you open your eyes, and you see nothing except Light; all you hear is Music; all you can feel is the Word vibrating; all you can drink at that time is Nectar. And it's so beautiful. Because that whole energy which is in our bodies just comes together completely, just fills us up, and there we are, feeling just so beautiful.
The Sayings of Guru Maharaj Ji, 1974

Denver, Colorado, 20 February 1977
Everything else can repeat itself except that experience of Knowledge, because it's a flowing river. We - remember this: Knowledge does not seek us, we seek Knowledge. Knowledge will not shut our doors to ourselves, we shut the doors to Knowledge. And ever in our lives, if we have ever experienced a second of Knowledge - let that seed grow; don't demolish it. That is the seed that is going to bring us - if you call it liberation then it's liberation, satisfaction of mind then it's satisfaction of mind, peace, peace - all right. You name it, and it's going to bring it to you. What I talk about, that light I talk about is not the light you see because you happen to be most fortunate to have two eyes. I'm talking about that light that even that blind person sees and experiences. I'm not talking about the music that your two ears experience, I'm talking about the music that even that person who does not hear, he listens to that music. I'm talking about something that's a little more beautiful, something a little more within inside of us, a little more subtle and a little more gracious than everything else that we do in our lifetime.
Golden Age, April 1977, Issue 37

London, England March 4th, 1978
And it's just to be at such a nice place, to be at such a fresh place, to be able to open up to that experience of Guru Maharaj Ji. To be able to, by Guru Maharaj Ji's Grace, step on his boat, and let him carry us, let him take us to that "Supreme Aboard" where we all want to be. To be with him all the time, 24 hours a day. Not just one second, not just two seconds, not just three seconds, but where there are no seasons, where there is no night, where there is no day, where there are no seasons, where there is no time. To surpass all barriers of anything: time, death, life, imagination; even, to some extent, any barrier that - if infinity has a barrier - to even cross that, and to go where that "Supreme Aboard" really is, and just to be there with Guru Maharaj Ji, is the most incredible experience. And that's the experience that I have had. And that experience is so incredible, that when you let yourself go, you can feel that experience. You know it's there. You don't need any proof. It's like a light that even a blind person can see. It's like a music that even a deaf person can hear. There doesn't need to be any proof; there doesn't need to be any explanation. And yet it is there, and it is beautifully manifesting itself. It's glowing.
DLM publication, 1978

Hans Jayanti Festival, Kissimmee, Florida November 11, 1978
And meditation. What a reality. What an experience. What a thing! To just take us inside, way deep inside, where there is nothing but total bliss, total oneness, total calmness, where there is that placewhere, Brahmanand says, "I've seen a great wonder. I've seen a palace that is completely so brilliant. And there are all these lights everywhere, and they're completely saturating. And a blind man is seeing this and describing it. What a wonder!" Then he says, "Without anybody playing anything, there is this music that is constantly playing. And it's incredible. And a deaf person hears it and is completely blissed out, completely lost, completely saturated in this incredible music." And then, "In the middle of the sky, there is this well. And a lame person climbs up and drinks the nectar dripping from that well. Oh, what a wonder it is!" And Guru Maharaj Ji has shown us that wonder.
Élan Vital, Volume III, Issue 2 Summer 1979

Miami, Florida December 25, 1979
And it's the same exact thing in that sense. We cannot become musicians. There is no such thing as that at all. These guys try and they try and they always go slightly off-key. Because it's completely generated from them, by them. The music that is within inside of us never goes off-key. Because it's the music that Guru Maharaj Ji plays within inside of us. That's completely endless. It cannot go off-key. It can never stop. It is always there. And for us to tune in to that is far more blissful. It is right, because there is an experience.
Divine Times, January/February 1980

Shri Sant Yogashram, New Delhi, Hans Jayanti celebrations, November 9 1990
This should be told to the engineers. Go and tell them in their college where they get education that there is such a palace which has no support from below and it is illuminated as well. Is that possible? And you go to a medical college and tell those doctors that a blind man goes and enjoys the scenic splendour of that palace and then narrates all his experience. Then, of course, it will be a great fun. And you also go there where there is a music class going on and inform them that there is a place whew you can hear the sound of gongs, conches and drums without their being beaten, blown or played by anyone. And then you go again to the doctors and tell them about a deaf person who is so engrossed in listening to those sounds that he has lost awareness of his physical being. Do you know? And then again go and ask the food minister and all these ration-card people whether they have any Knowledge about such a living person who after dying, revives again and comes alive. He becomes hale and hearty with a new vitality in him without taking any food. And then go to an osteologist and tell him whether he knows about a person without arms and legs who climbs an immensely high place without any staircase and there he drinks pitchers full of an ambrosial elixir.
'Life Force', Volume 7, Issue 2 April-June 1991

All the outrageous, incredible information published here about Prem Rawat's Divine Music or 2nd technique of meditation is sourced from public statements made by the Rawats in official magazines published by their organisations.