Prem Rawat's Teaching about Himself

The young Prem Rawat or 'Maharaji' was coy in public about specifying his role oncve he arrived in the West. His followers publicly proclaimed him as the Lord of the Universe, the Prince of Peace, the avatar of the age and he accepted the accolades and the lifestyle he believed he deserved. To his followers he openly proclaimed his divinity but in front of non-believers, especially in front of television cameras, he showed a marked reluctance to bluntly state that he was the incarnation of God on earth at the present time.

He was also somewhat confused. While explaining to journalists that he was the Perfect Master because he could teach 'perfectness' and reveal God he eschewed the lesser title of prophet.

In 1975, giving a speech in front of thousands of his followers and a small number of the curious, he got a bit tangled up explaining he wasn't actually the Guru Maharaj Ji he was extolling, or was he?

Television interview, New York - 9/10/71
The Western world is much more civilized in all the materialistic things than the East, or than India. But they miss one thing. They are so civilized, but they miss one thing. And that is spiritual Knowledge.
Spiritual Knowledge? Yes. And that's why I have come here. Because we are helping many, many people from America, from London, from Italy, from many, many places, who went to me when I was in India. And they told me that they really required me. And now I have come here to give them spiritual Peace. And I really see that the people in America are the most interested people in this Knowledge.
Would you clarify for me your relationship with God? Do you see yourself as God, or as a worker for God? I am only a humble servant of God. Whatever He okays, I am doing that. I am only a humble servant.
Élan Vital

Television interview, Toronto - 10/4/71
They call you the Prince of Peace, and the perfect person in flesh. Why is this? You see, they call me that. I don't say it myself.
You don't think of yourself as … I only think I am a humble servant of God. I don't think of myself as the Perfect Master. See, a king is king for his citizens, not for himself.
Well, then all the pomp and ceremony, and the rose petals -- you don't ask for that? No, I don't ask. It is given. It is they who do that. I don't force them to do that.
Do you think it's a good thing, though? Do you think that is too much worship? Ah well, you see, it is up to their opinion what they want to do. I don't object to that. Whatever they want to do.
Élan Vital

Miami, Florida, U.S.A. 15 June 1972
I don't claim myself to be God, or to be Christ, or to be anyone like that. No, I just claim myself to be a humble servant, serving humanity, by the grace of God. And I have got this Knowledge for human beings.
Divine Light magazineNovember 1979 Volume 2, Number 3

New York Times Interview published April 8 1973
KS: "One of your posters says Guru is greater than God. This would be considered blasphemous by Jews, Christians, Moslems and many others."
GMJ: "The Guru is the only one who can open the third eye through which a person can see Divine Light. The Guru is the only one who can give the word. It is the same word which the Bible speaks of: In the beginning was the Word, and the Word was with God, and the Word was God." Having said that, he quickly corrects himself, "I am not God; I am only His servant."
Guru, Godmen and Good People by Khushwant Singh

Boulder, Colorado on June 28, 1973
It's not religion either, because religions have existed in the world for a very, very long time. At the time of Hitler there was a religion, and now there is a religion. It didn't do any good. You know it didn't do any good. It didn't do any good to Hitler, it hasn't done any good to people today either. Now you know this, you understand this, you have practical proof of this, and you can't put it out of your mind for some reason: religions weren't able to bring peace; scriptures weren't able to bring peace.

That's why always a Messiah has to come into this world -- to bring peace. I don't say I am a Messiah, mind you. I just say I am a servant of God trying to preach this Knowledge to you.
And It Is Divine magazine Volume I, Issue 11, October 1973

Interview with Guru Maharaj Ji in Newton, Massachusetts, August 3, 1973
Q: Would your role be analogous then to John the disciple or to Jesus the Christ?
A: Well, I just don't put myself in any of those. I'm just a humble servant trying to preach this Knowledge to people.
Q: A humble servant of …
A: Of God. Of this most Supreme Energy. I don't say I am a Messiah, I don't say I'm a prophet, I don't say all those things.
Q: They are said of you.
A: People say, people say … actually the most common thing they say about me is that I am a Perfect Master.
Light Reading 1980 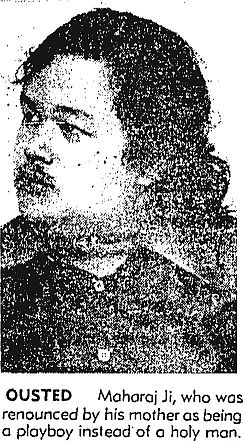 New York Times April 15, 1975
Gurus are born and not made, said 17-year-old Maharaj Ji in New Delhi, describing as "funny and ridiculous" his mother's expulsion of him as head of the Divine Light Mission. The mother, Shri Mataji, had said she would install her oldest son, Bal Bhagwan Ji, 24, to replace the one she considers a "playboy" since he established headquarters in Denver and his home in California. He was back in India after 22 months but his planned spiritual gathering on Sunday was postponed by Lucknow officials in deference to his mother. "I am not God," the guru acknowledged, but he added, "I cannot be thrown away for any reason whatsoever."
New York Times